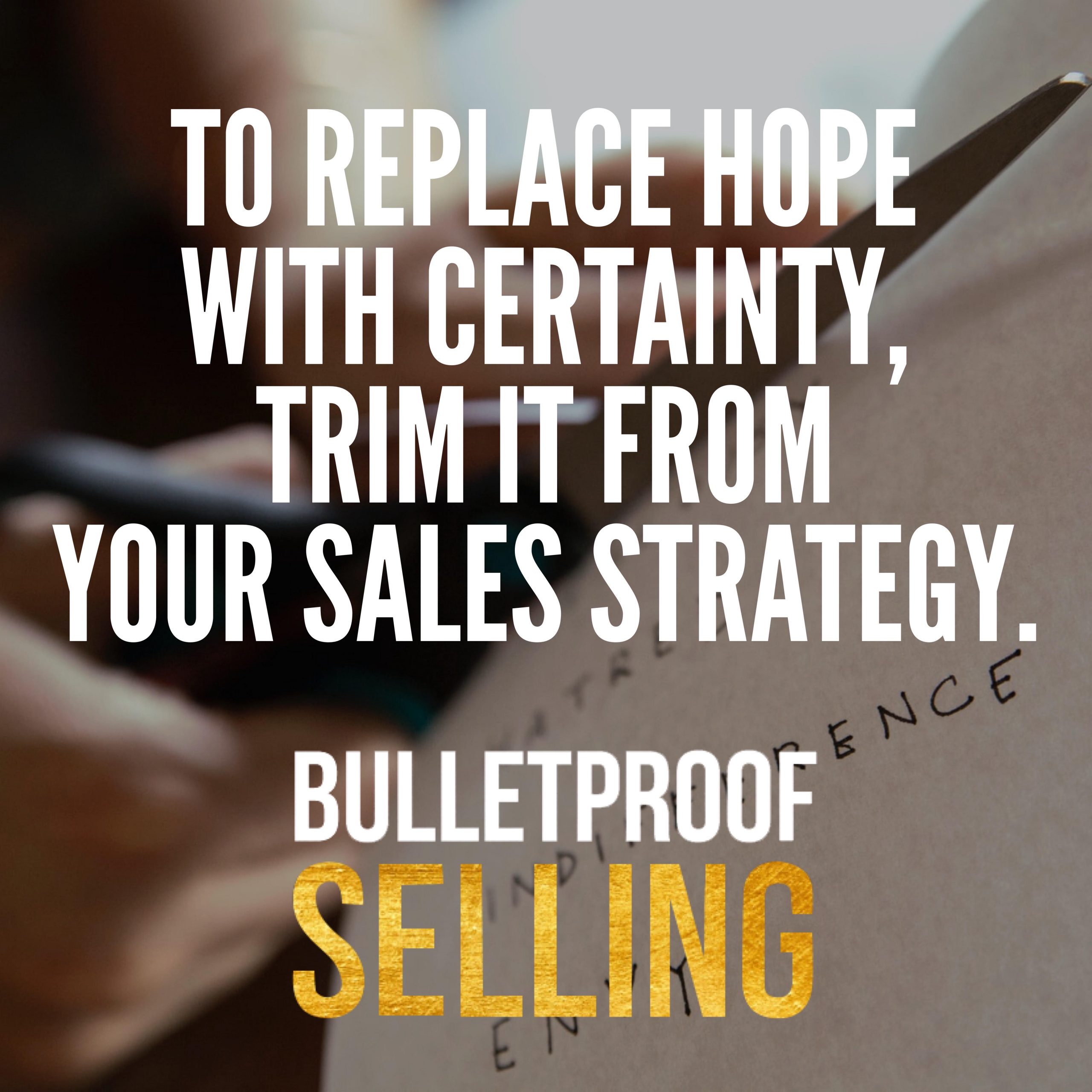 Trimming Hope From Our Sales Strategy 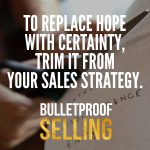 There are hundreds or great books, blogs, podcasts and courses on sales tactics, processes and strategies. Unfortunately, few – if any – talk about how to make sure salespeople actually apply them. None of them share how to turn those great strategies into systems.

For two decades, I’ve been traveling the world and studying teams who were given impossible odds and still found ways to succeed. These are the folks who would fight wildland forest fires, team charged with clearing buildings of opponents in combat zones, and even salespeople who were making goal when everyone around them was struggling.  These are the folks we call ‘Bulletproof.’

Not the best technology.

Not the most resources.

What makes these folks the best is that they’ve trimmed hope from their strategies. They do that using systems.

Let’s define what a sales system is, so as you dive into the resources here, you’ll have an expert’s insight into what makes a system different from the processes you’ve been learning. Because we’ll be ‘trimming’ hope from your sales strategy, it’s only fitting that we use the acronym ‘TRIM’ to define this powerful method.

Here are the things that make a sales system a ‘system’ instead of a process or tactic:

T – Trigger: Every sales system must have a ‘trigger’, or some external event that brings the system into play. Whether it’s researching a prospect, launching them into a sales campaign, prepping for a sales meeting, conducting a discovery session or issuing a proposal, Bulletproof systems are linked to external events in sales cycles. It’s imperative that a sales system be tied to one or more triggering events so a salesperson knows to launch the system on a prospect’s account.

Once a trigger event has occurred, systems can be automated to run within CRMs, contact databases or manually fired on a prospect’s account so the salesperson can execute its steps. Regardless, if a system does not have a trigger event associated with it, its likelihood of being used will be minimal.

R – Repeatable: A system that’s not repeatable isn’t a system, it’s a fluke. One of the most critical and often overlooked part of systems is that they’re repeatable. A repeatable system is not dependent on a salesperson having to remember the dozens of best practices they and their teams picked up. Rather, it can be called upon, implemented, and be used by any salesperson with access to it. This is why housing systems within the company CRM is a topic we touch on multiple times with every team we teach Bulletproof Selling to.

I – Improvable: One of the key differences between a Bulletproof sales system and a process is that most sales processes are static. Once they’re created, salespeople are expected to use them until they’re told to stop – although we’ve rarely found salespeople are held accountable to use the processes they’re provided with. Bulletproof sales systems are based on those used in the most dangerous and challenging places on earth – combat zones.

In those environments, everyone is invested in innovating as quickly as possible, so static processes don’t last long. When an opponent changes their tactics, the teams I studied had to update their own systems in order to stay alive. As economic changes, pandemics or a new generation of salespeople and prospects enter the scene, it’s critical that systems be regularly re-examined and updated to adapt to changes in prospect behavior, industry growth/decline and or course the effects of a pandemic.

M – Measurable: First, sales leaders must be able to measure how many times any given system is being used across their teams. While this doesn’t have to be actively tracked in the same way that deal conversion and time-to-close ratios are, it is important that sales leaders have the ability to monitor whether salespeople are using the systems everyone has invested time in creating.

For instance, if a campaign is created for ‘cold’ prospects, sales leaders need to be able to measure how many prospects that campaign was actually used with. If salespeople didn’t use the campaign system, we know we have a coaching problem. If the system was used on every new prospect entering our pipelines and we aren’t happy with the results, we know we need to modify the system and improve it.

By ensuring you’re ‘TRIMming’ hope from your sales strategy, you can ensure your sales are getting better each and every week – it’s the first step to ensuring you make your selling Bulletproof.